In May 1931 I found myself being transported, in an old steam train, willy nilly towards Newmarket, courtesy of Maudsley Hospital in South London where I had been incarcerated for 3 months for tests for some weird manifestations which I had been getting and whilst there I contracted tonsillitis.

So they decided to give me a break away from home. We were met at Newmarket station by Ken Bowyer with a very old car with a soft top and celluloid windows. His Mother had kindly offered to take in boys such as myself who were in need of a break. I dreaded it but little did I know how enjoyable the experience was going to be. 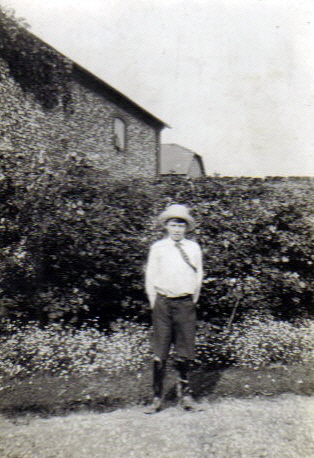 Alan as a boy outside Place Farm

I was greeted by a Miss Howlett whom I was to know very well and who was an assistant to Mrs Bowyer but whose home was, I think, in Ipswich. She had been appointed to be my loco parentis.