The Doctor’s room at The Beehive

This was the middle room to the right of the bar. This room had many uses. Firstly, it had a fireplace with an open grate – handy in cold weather. The fire would be lit, the serving hatch from the bar was opened and whenever a drink was needed you just stood your glass on the shelf, the hatch would open and your order was soon done.

Secondly, the Slate Club or TGWU subs were taken there, as were the Dart Club subs.

hirdly, the village doctors’ surgery was held there. On Wednesday it was the turn of the Newmarket doctors as some of the village people were registered with them. But most came under Wickhambrook practice.

Every Friday about 12 o’clock the doctor’s car would arrive. If you were able to phone him beforehand he would bring your medical history card and what he thought would be the right medication. If this was not possible he would tell the dispensary at Wickhambrook, and off someone would go on their bike to get it!

I’m told that Jean’s grandfather was often called on, day or night to take people to Wickhambrook in his pony and trap. (I have still got one lamp from that trap). 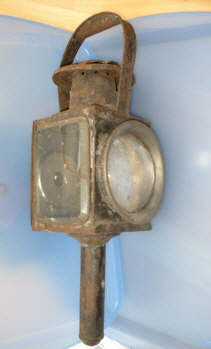 A lamp from the pony trap

One story told by my late mother-in-law was of how she took Jean to the local surgery at the Beehive for a bottle of linctus. But the bottle that she was given was smaller than on the previous visit.

“Small bottle this time doctor!” said mother-in-law. The reply was “You can have a bigger bottle. It would just have more water in it!”

Those who came to see the doctor would either wait in the park or on summer days you sat on the seat outside stop.

This was the bigger room of the three where the piano and the dartboard were. It also had a fireplace. This like the other rooms had many uses. If there was a friendly darts match you could not move in any of the other rooms. If you played and won, the loser would buy you a drink. With me it was mostly a half pint or vice-versa. Then when the Games were over, out would come the sandwiches and some onions in vinegar. No breathalyser, just the smell of onions!

Sometimes someone would play the piano, which soon led to a good old pub sing-song. The Harvest Hawkey was also held in this room. With food cooked by Mrs Bailey no one left hungry. I’m not sure but I think it was two shillings and sixpence or five shillings. Well worth the money anyway!

The Cricket Club held their meetings in there, as did the Transport and General Workers’ Union local branch. I have seen that pub so full that even the passage between the rooms was full with standing drinkers.

Mrs Bailey about to serve the food

At the front of the pub was a grass lawn cut short by Dorrie with a push mower. No motor- or sit-on versions then! There was a well-trodden path from the road to the door. Very few cars visited. If they did, they parked on the grass. It was mostly bikes which leaned against the fence for those who came from further afield, while the locals mostly walked.

Even the frontage had other uses. I can remember at general-election time, the Labour candidate did his meeting there in the open air, whereas the Conservative candidate used the Village Hall. When the candidate asked any questions, Stan Bonnett would say “What about the tied cottages?” After all, those who worked on the land in those days lived in a cottage owned by the farmer. Hence no job, no house (although this seldom happened). The best bit was that Stan never lived in one, he rented a cottage from the estate. Still he was ready to speak up for those who did!

The land around the rear and to the side of the pub was a small holding farmed by Horace and his brother Bill. This was farmed using horses with a large barn at the rear are storing what was got or used on the farm.

Lastly, the bus stopped at the Beehive and if it were a wet day you could shelter under the roof overhang and see the bus coming. If you were not there and you were a regular bus user, someone would say to the driver “Hold on a bit – so and so has gone to fetch their purse…”. And the bus would wait!