This public house was in the Bailey family for 200 years. The only direct descendant, Horace is now aged 81 and is the last of the original family in which the Beehive had passed from generation to generation. Originally, the beer was brewed on the premises in what was called the Tap room and sold in the bar.

When I came to Kirtling and made the Beehive my local, Horace’s mother, Edna Bailey had taken over as Licensee. Her husband Frederick Bailey had died in 1949 aged 67, and so Edna ran it until 1970, helped by her daughter Doris (known affectionately as Dorrie) and Horace. Even in her old age, Edna Bailey herself could still serve a pint or two and you did not need to check your change when it came to paying. Sadly she died in June 1970, aged nearly 91.

The Beehive was only 150 yards from my door. I used to just walk across the road if I ran out of cigarettes (don’t smoke now!) and whoever was in the bar always had time to talk to you. It was the sort of pub that if you went in a stranger, you did not come out a stranger. One side of the counter or the other, someone would always have a word with you. 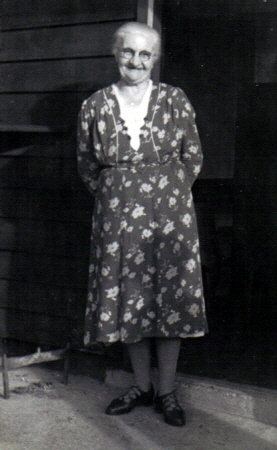 Mrs Edna Bailey at The Beehive 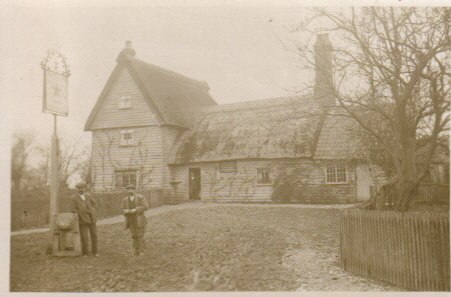 An old photograph of the Beehive supplied by Horace Bailey

The public were able to use three rooms at the Beehive – the bar, the ‘Doctor’s room’, and the Tap room. The bar counter faced you when you went in. Although it was very small, nearly everyone used to stop there. In fact if 9 or 10 stood there it was full, but that didn’t stop most from standing to drink, though there were some seats. I think it was a sign of weakness if, after a full day’s work you had to sit to drink.

In winter, the bar was very cold. There was no heating on the public side of the bar and only a small paraffin oil stove for whoever was serving the drinks. So most people stood with their top coats on

My father-in-law for one used to go off for his drink each night, at about 9:30. And when he got home, he would say “Why I left a warm fire to go and drink cold beer in a cold pub I don’t know”. But he did, like many others.

When you got to the Beehive, you would be asked what you would like to drink and your glass would be wiped with a clean cloth. And if your drink came from a bottle, the neck of the bottle was always wiped.

There was also a bit of friendly banter between some who worked on the farms. First one man would say “I bailed 100 bales today”. Then another would have done 550, and so it went on. I remember that someone said that every time there was going to be a hot summer, the eyes of the broad bean would face downhill. Then everyone would bring one of their broad beans – always their best one – until there was quite a pile of broad beans on the counter. Which pot they finished up in I don’t know! There was good friendly competition. Sometimes it was just like a harvest festival with men proud of their vegetables or flowers bringing it up to show others.

The cellar which led off from the bar was always cold. I don’t know why as it was only single brick, in but summer and winter it was always the same. I would have liked a penny for every time that the cellar door opened and closed as that was where the beer was kept. At first it was just ale, and only later wine was added to the list, and finally a spirits licence was obtained.

I remember one Christmas going to the pub before dinner. After a glass of beer and Happy Christmases all round, Mr Kiteley bought a bottle of sherry from Dorrie which he then handed around. Then someone else bought a bottle and so it went on. I was due to go the Forge House, as mother-in-law did the Christmas dinner. I can’t remember much about the dinner, but I do remember that my wife had put the Parson’s nose on my plate and I had eaten it thinking it was a roast potato. I am pleased to say that experience was never repeated! 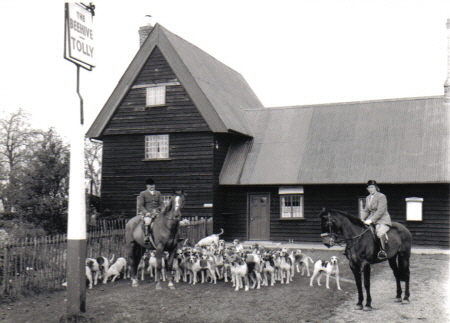 The hunt outside the Beehive

On Wednesday and Friday morning, the bar became the waiting room for the doctor’s surgery.