At some time in the past my wife’s grandparents kept the Queen’s Head. I can remember her grandmother saying how the farmers used to drive their cattle and sheep to the market at Newmarket. The cattle market used to be behind the Waggon and Horses pub in the High Street, Newmarket.

This was done early in the morning. Two or three men would be in front closing gates or standing in gaps in the hedges so as not to let what they were taking to the market escape. If one sheep left the flock, the rest would follow. Not too good if it was into someone’s garden! Although I must say sheep always had a shepherd who had one or two dogs. These kept them moving. I have seen a dog running over the backs of sheep to get them to go where they were supposed to go. Mostly pigs would be taken in a cattle float drawn by a horse.

As this was done early to get to the market and on cold mornings, it didn’t go a miss to have a hot mug of tea with a tot of something in it to warm them up. If they had a good price for the stock, a stop on the way home for a pint or two made the day. 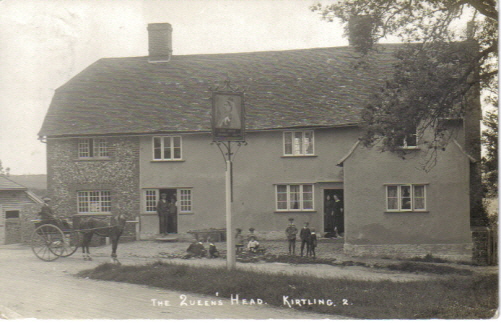 In my time living in Kirtling, the Queen’s Head was the only pub in the village to have bar billiards.  The landlord then was Mr George Bixby. He ran the pub with his wife and they kept chickens in the small meadow. When it was closing time, George would stand behind the bar, a half smoked home-made cigarette in his mouth. Placing both thumbs under his trouser braces, he would nod his head towards the door and say “Opp it!”. You knew what he meant, no arguments – drink up and go!

Sometimes in the summer in the meadow, which we called Dan Bridge (now the car park behind the Queen’s Terrace bungalows) would be a travelling fairground run by ‘Stinger’ Wright from Westley Waterless. He would, together with some of his family, work in the harvest fields during the day and run the fairground at night. On Saturday he would open in the afternoon.

As the Queen’s Head was on a main road it used to be a good stopping off point for some who had biked from Newmarket to have a pint. Quite often some of the racing people from Newmarket would love to call in for an evening to have a game of cards and a friendly chat and a drink or two with whoever was in there.

George Bixby had a small caravan down the bottom of his meadow, and when there was racing at Newmarket some of the on-course bookmakers, who always carried their money bags with them, would get a lift to the Queen’s Head, take their bags to the caravan where Jack Orris senior would be waiting to look after them. They kept Jack topped up with beer which meant everybody was happy.

Sadly George Bixby died and the licence was passed on to his widow who ran it until she had to give up.

Next came Doug Storton. When he took over the old pub stepped up a gear or two. We had dances in the barn. Some cooked meals were served. 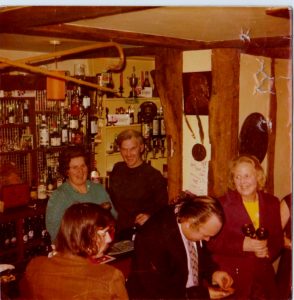 Doug, together with wife Shirley, used to have Country and Western singers perform there. One in particular was Wendy Travers. None of this ear-splitting can’t talk – just good singing of songs you knew the words and could sing with it.

My favourite beer then was Worthington E – very moreish! I remember biking home and thought I will stop and have a pint. Doug Storton came to the counter, pulled the pump handles and filled the glass. “Bit pale – this one” I said. “Oh it must be a new barrel”. “Doesn’t smell all that” I said. “Shirley” said Doug S. “What’s wrong with the E?” “Sorry” she said “I have cleaned the pipes and I didn’t get a chance to finish that one”.

They were included in the toast to me. Thank God he never had any grandchildren – I think he would have emptied the bottle. How I got home that night I don’t know, but that was the kind of man Doug Storton was.

Lastly the dart board – this was one game which all pubs had. Apart from 301- or 501, a very popular game was Shanghi. This you played with as many players as you liked. The idea was from 1 to 7. You had 3 darts to try and get a single, double, and treble starting a 1 then 2 etc. When you got to 7 you aimed for 25 or bull (50). This one particular time my luck was in with my darts and I got a very high score, winning about 15/-. This score was so good that we wrote the score in chalk on the beam over the dart board. From then on anybody that played Shanghi would put 6d in a jar behind the bar and whoever beat it collected the cash. No-one ever did. I think the cash went to charity, but which one we never did find out. 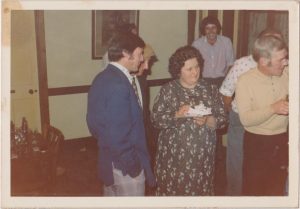 The Queen’s Head remained a public house until about 4 years’ ago when it was sold off as a private house – the end of an era.