Kirtling’s longest serving public house was the Queen’s Head at the north end of The Street, which closed in 1999. Called the Kirtling Queen in the nineteenth century, it was famously associated with the visit of Elizabeth I to Kirtling Hall in 1578.

The Chequers on the south side of Kirtling Green, near Whybrows Farm, was licensed by 1764, and was leased to a family of Bury St Edmunds brewers by 1813. It had probably closed by 1847. The Beehive closed in 1992. The only remaining pub is the Red Lion.

A smaller pub at Upend operated in 1686 but there was no licensed house in the hamlet in 1766 and it is uncertain whether this was the same as the North Arms which was known to be operating in 1858 but closed before 1972.

A tailor and draper, a knacker and the Canham family’s grocer’s shop and warehouse at Kirtling Green were recorded in the late 18th Century. The Collin family were maltsters throughout the 19th Century. A manorial windmill was first mentioned in 1310, continued under an independent miller until 1875, and in 1891 was in the ownership of the Collin family of Parsonage Farm. 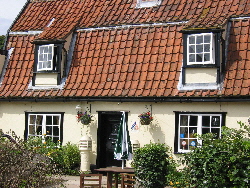 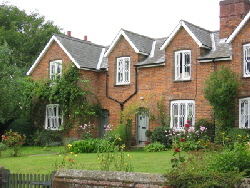 Estate cottages built in the 1840s

Next: Religion and School