Opposite the main house was small pond and this was often frequented by noisy jackdaws. Over behind the pond was Mrs Bowyer’s Italian garden and behind that were the tennis courts. Along the left hand side of these was The Bungalow. This was an old railway carriage, probably an old 6 wheeled LNER, or earlier.

At one end 4 compartments had been knocked into one and this was Frank’s and Ken’s workshop and at the other end there were two compartments used as a sort of summer house or quiet retreat for tennis players. Tea was sometimes brought out here. In the 1950s this was still in situ but covered with roofing felt. 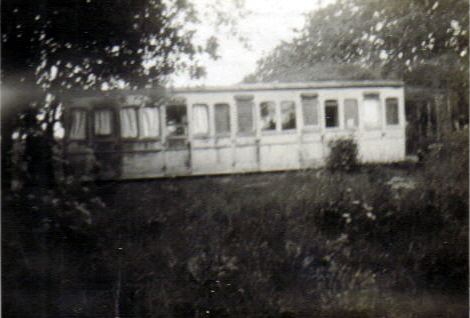 An old LNER carriage known as ‘The Bungalow’

I gather that things are very different now with private residences on the sites of the old buildings.

Well, all I can say now is belated thanks to the Bowyer family for giving me such a happy time all those years ago.