“It is now 50 years since I first made Kirtling my home, having moved in with my wife’s parents after I married Jean, their daughter. We lived with them for 10 months before moving to the house we now live in.” 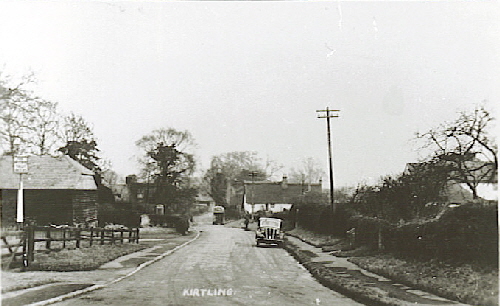 “My father in law Frank Perrin, together with his brother George farmed Forge Farm. At that time, the blacksmith forge was still in place. This was used by Frank who was the village blacksmith prior to taking up farming. Of course when the tractor took over from the horse, there were less and less horses working on the farms needing to be shod.

I myself worked for a painting and decorating firm from Soham and Jean worked for Ashfords in Newmarket High Street. In those days we had to bike to town, where I would catch a van that would take me to whereever the work was.

Whatever the weather, it made no difference. You just got on your bike and went. How well I remember on cold mornings: I felt nicely warmed up until I got to Duchess Drive, when it was downhill all the way and I arrived in Newmarket just as cold as when I started!

Kirtling village 50 years ago was a very different place. Most of the menfolk worked on the land and at one time Ken Bowyer had as many as 37 men working for him at Place Farm. Coming by the farm entrance when it was leaving-off time was a sight in itself. Most of the lads had bikes, though some walked.

You wouldn’t see a car in sight. As the farm workers went through the village, each would stop at his house with a shout: “Goodnight Jack”, “Goodnight Percy” you would hear as one by one the group got smaller, until the last one reached his home. Then it was time for a quick wash and shave and all the family sat down to a hot dinner and listened to the news on the wireless.

After which out they went on the garden or the allotment as they all needed the vegetables to see them through the winter. There were no supermarkets in those days. Most of their shopping was in the village shop, though some of the wives did get on the bus to Newmarket.”