One Saturday night I was awakened by a pile of magazines falling on the floor. I told Mrs. Bowyer that a cat had got in and knocked the magazines over. She replied ” It wasn’t a cat, it was an earthquake!”

And indeed it was! It had been quite a big one for this country and was centred in the North Sea and was felt in London. Every Sunday we used to have a little musical band in the front reception room and on this occasion someone found a song called “All through the earthquake’s tremor” and we played that! I can just remember the tune.

In the nursery was an old gramophone which we sometimes used to entertain ourselves. It was not without it’s dangers though as the winding ratchet used to stick and when one let go of the handle it would fly back very powerfully and clout one’s knuckles. My favourite records were “Collette” and “An egg and some nam and a nonion”. I have since obtained a second-hand copy of “Collette”.

I gradually realised that I was being woken at about 6 every morning by a noise that went Bwm Bwm Bwm   Bwm BwmBwmBwmbwmbwmbwbmbmbrrm on the ceiling.

I asked Mr. Bowyer about this and he took me outside to look at the roof. There was a long vertical rod protruding upwards. He said it was a patent indicator to show when the water cistern was full. There was a very large water tank which was filled once a day and the water was pumped up from a well in the grounds of the Towers by a petrol driven pump and the operator could see the rod appear through the roof when it was time to switch off. There was no mains water in those days. The noise was of course the indicator hitting the top of the tank. All electricity was generated at The Towers. 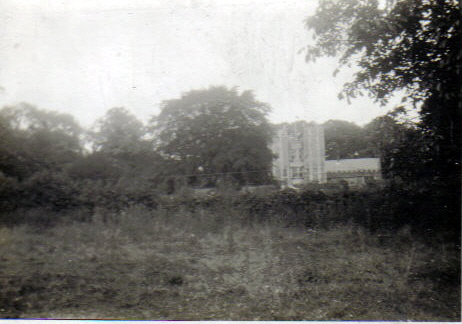 Every year there was a garden party at The Towers and I was invited. Music was played on an old 78 gramophone. Great fun.