On the night of January 17th 1945, a Lancaster bomber from 75 squadron 3 group was returning from a bombing raid over Germany. It was in serious trouble, and hit the old Suffolk thatched barn behind Hill Farmhouse. The telephone and electric wires were severed in its wake.

It left one engine in the thatch of the barn, and then veered right, ploughing through the field which was meadow land. Shedding parts of the plane as it went, ammunition, fuel and all sorts of debris was sent tumbling about, knocking down the out-houses behind Hill Cottage and a corner of the cottage. The main fuselage finished up nose across the road, its tail broken off so you could stand on the bank and look into it. One engine was catapulted onto the farm land beyond the road.

A fire started and the people living in Hill Cottage, which was two houses, could not get out. Very flare lights started to go up. Mr Gent leapt out of bed, fumbled for his trousers, as he ran to help. It was dark and he kept falling over little heaps of hedge trimmings that had been piled up after hedge cutting ready for burning.

He was first on the scene. He climbed up the bank beside the cottage and fell over something. It was an airman. As the airman sat up he spoke “My mate’s gone for help”.

His mate was the gunner, who in his turret had got thrown clear. He ran down the road – the first house he came to he could get no help. He then arrived at Hall Farm. Knocking so hard on the door that he smashed a pane of glass. He eventually raised the occupants and was given help. Mrs Savage and her two sons lived in Hall Farmhouse at the time. Her husband was in the army in Italy. 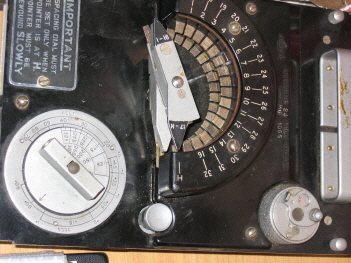 Part of the bomb release controls from a Lancaster

Bill Cook and Eric Simpson arrived. They started to try and get the occupants out of the cottage. The fire engine arrived and they got Shim Howe out. His tunic was on fire. Hasby Howe was clutching his cash box (he worked for Cooper Bland). The Ambulance arrived from Ely. Mr Reeve, the Hill Farm foreman arrived. All these people wanted tea. The police promised to return the next day with extra coupons to replace the tea but they never did.

When daylight came and the people who worked at Hill Farm came to work they found the carthorse still feeding in the yard beside the battered barn and an engine hanging in the thatch.

Mr & Mrs S. Howe lived in the far end of Hill Cottage and they wrote to the Newmarket journal to thank all the people who helped them in their recent terrifying experience (not being allowed to mention the nature of it owing to the strict security at the time). This edition of the journal was sent to Felix Bailey of Kirtling who was serving in the forces in Italy at the time. For many years after the crash, pieces of ammunition and wreckage were found in the garden of Hill Cottage and surrounding areas.