Much of the history of Kirtling Tower is closely associated with the North family. It was Edward North who constructed Kirtling Hall in 1537. By 1660 it was the largest country house in Cambridgeshire, with 60 hearths. The only surviving part is the free-standing three storey gatehouse.

The Norths were prominent in public affairs, Edward North being a close adviser to Henry VIII. From 1530 – 1677, Kirtling Hall was one of the houses of the wealthy household of a family prominent in public affairs. The second Lord North, Roger, spent a lot of time at Kirtling. When in residence he was accompanied by a very large household which included a secretary, physician, several dozen gentleman and yeoman retainers, a cook, footmen, a fool, a groom, porters and many menial labourers.

The 3rd and 4th Lord Norths were important patrons of music at Kirtling Hall. They also kept a large and well stocked deer park, and played an active part in running local and county affairs.

Between 1677 and the time it was demolished in 1801, Kirtling Hall was hardly lived in by its owners. However, in 1827 Maria North inherited the estate from her eccentric uncle (who had joined the Greek Orthodox Church and was chancellor of his own university on Corfu). Maria and her husband set about restoring the dilapidated Tudor gatehouse that was all that was left of the original Hall.

The 11th Lord North and his wife converted to Catholicism before he inherited the estate and introduced a number of catholic tenants and domestic staff and briefly a catholic orphanage. His objection in 1905 to the new vicar using the family chapel for services caused a furious row between the two which led to the vicar’s resignation. The 11th Lord North visited mainly for shooting while living mainly at Wroxton, but his son moved permanently to Kirtling Towers after retiring from the army about 1929. 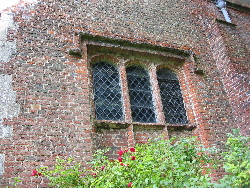 Detail of old brickwork on the parish church