50 years ago, an ‘outing’ meant a pantomime at Cambridge or seeing Max Miller at the theatre. Even a bus journey to Bury St Edmunds was a treat. If you were lucky enough to go further afield it meant ‘on your bike’ to Newmarket railway station, thence a ride on a steam train. Not many buses would match up to catching a train! If you had five shillings to spare you could get Sonny Lever to meet you with his taxi (never on time, was Sonny!)

But the dart club outing was to a lot of us the highlight of the year. As many as three buses would park out the front of the Beehive, I have known 112 members of the club, of which possibly 20 could play darts! The others were there for the social side. Whole families would be at the pub to go to either Yarmouth, Southend, or Clacton. These were the most popular seaside places then. 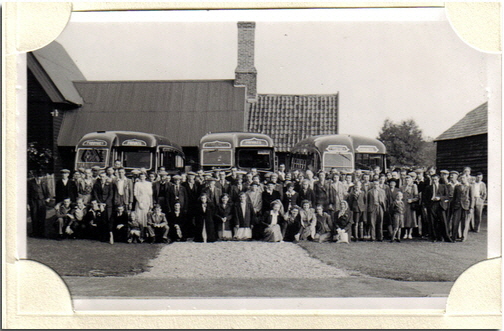 Buses line up outside the Beehive Pub for an outing

First, crates of bottled beer, some lemonade, then trays of sandwiches – all would be stacked away ready for the stop half way on the journey for beer and refreshments. For some this was just the start of the day’s drinking, let me tell you. Some of the old boys and some a bit younger could soon put back a few pints. Then, back on the bus to complete the journey.

As soon as we arrived, it was a fast exit from the bus to the nearest toilet – what a relief! Some with young children went straight to the beach, bucket and spade at the ready to build the biggest sand castle ever. When this ended, off came shoes and socks for a paddle in the sea to wash the sand off.

Some of the parents ventured into the sea, trousers rolled up for the men, shoes and stockings off for the women. I think someone said ‘salt water would cure corns on your feet’ although I never met anyone who could actually confirm it had worked.

Come 12 o’clock we all went to the good old fish and chip restaurant (I don’t know why fish and chips always tasted better at the seaside!) Then it was off to the amusement park…

Fun at the seaside

The amusement park called ‘The Kersal’ at Southend was a favourite on these trips. Young and old all had to have a go on the rides. The one that sticks in my mind was ‘The Wall of Death’ – how the rider defied gravity to come within 12 inches of the top of the wall! That made me stand back, I can tell you. And I remember that the helter skelter, dodgem cars and the scenic railway made for a few screams from the ladies!

Mind you there were some of the men who got off the bus (my Uncle Bill included and possibly my father) who would go straight to a sea front pub and apart from something to eat that’s where they stayed until they got on the bus and made their way home! Was there any trouble? No way. Everybody enjoyed themselves and made sure they did not stop others enjoying themselves.

After the fun at the seaside, it was back to the bus, children clutching new buckets and spades, a beach ball, ‘kiss me quick’ hats, and most of all the traditional sticks of rock. Oh, and let’s not forget the windmill on a stick. Whenever I had one as a kid there was never any wind to turn it but if you let it hang out of the bus window it went like mad! (and soon broke).

On the way home

Now the journey home. The enjoyment never stopped when you left the seaside – Oh no! Out would come a mouth organ and the singing would start. The good old songs thrown in with a few special ones, often by the same person who was coaxed into singing last year. One singer in particular was Oscar Starling. He had a voice which could easily have been on Top of the Pops! But the entertainment did not stop there! Half way home the bus would stop at a pub where we were made most welcome – still singing! At 10 o’clock, it was ‘Time gentlemen, please’ and back on the bus to Kirtling. What a day!

I was fortunate to go on these trips so I don’t know what the village was like for those who could not come with us. I bet it was a ghost town feeling with us lot out of the way!