Below the nursery was the kitchen, with a lovely coal fired range and beyond that was the ‘back kitchen’ where clothes washing and washing-up was done. This had a staircase to the nursery above. Opening off the kitchen was a door, but more of that later!

In the hallway was another door which led outside to a lovely old steam traction engine, (where is it now I wonder?) and behind this was the horse yard which was a boggy mess of straw – apparently bottomless! There were some old stables too, one of which contained some ferrets in a cage. Near here were the milking sheds and the pig sties. Mr Bowyer had 4 or 5 cows and 4 or 5 pigs. 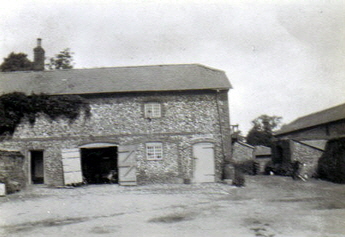 The coach house and stable

Several times a week some milk was put in to a hand-cranked separator, in the dairy, which I loved to turn. Cream came out of one spout and blue milk came out of the other. At the end of each week Mrs. Bowyer made butter from the cream with a wooden butter churn on the kitchen table. She cut it into pieces and stamped each piece with BOWYER by means of a wooden roller which had the name embossed on it. The blue milk was fed to the calves and a goat.