What we know today as Kirtling Tower was built as the gatehouse to Kirtling Hall in the 1530s by Edward North. However, the history of the site goes back much further. The first documents refer to Kirtling castle in 1219. Later references indicate that it had a moat crossed by a bridge in 1260 and an encircling ditch and palisade in 1310.

In 1337 it was described as a ‘forcelet’ suggesting that it did not have stone defences and keep.  The wall was repaired in 1392. The only buildings recorded before 1400 were ‘ruined and wasted houses’.

The castle was lived in at various times during the 13th and 14th Centuries. In the early 15th Century it included hall, kitchen and chapel and a ‘longhouse’ outside the moat. In 1424 a new hall was built inside the moat for the earl of Warwick by a carpenter from Saxon Street using 100 oaks and 10 ashes from Kirtling park. The architect’s specification included a parlour, solar and two chambers at the east end and a pantry, buttery and a passage leading to a kitchen. By then there were several other buildings within the moat. In 1528 Robert Brown kept the use of the parlour and two chambers, but rented out the rest of the house to a man from Little Bradley. 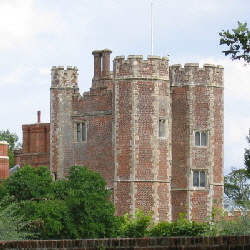 Kirting Towers as it is now

Next: The North Family