Kirtling, like most villages around had family names which seem to predominate. Ashley had it Wades and Waddys. Cheveley had the Rolfes and Tweeds. Kirtling was mainly Baileys and Levells. It’s not surprising that two of the public houses were run by the Bailey family.

The Red Lion’s Licensee was Cyril Bailey and his wife Lily and daughter Sheila. In those days Cyril worked at Oak Farm which left Lily to run the pub during the dinner session and the early part of the evening. At that point, Cyril would take over and then later on there was a joint effort to do the clearing up. 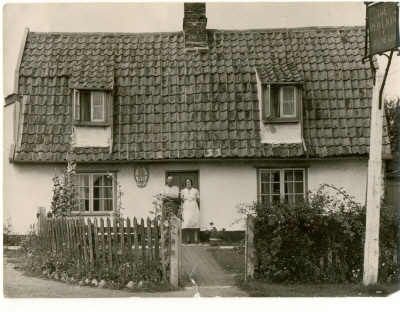 The Baileys outside the Old Red Lion

This pub was mostly used by the other members of the Bailey family. Stan Bailey, the farmer from Oak Farm, his son Eddie, Ted Bailey and his wife Doris, Lou Bailey, Joe Bailey, his wife Winnie and sons Alan and Trevor. Quite good really: if you walked in and said ‘Evening Mr Bailey’, that took care of most of the folks in there! However, there were others – sometimes Billy Woollard would play his concertina which led to a good old sing-song enjoyed by all.

No binge drinking in those days. At 10 o’clock there was ‘Time Gentlemen Please’. If you wanted another drink at 5-10 you might not get it if you hadn’t drunk it down by 10 o’clock. The law with a very strict in those days. If someone’s sleep was disturbed after closing time, the local policeman was told and he would visit next time at drinking up time. When he walked into the pub you would go, even if you had drink left in your glass. You did not answer back in those days!

As for singing, we didn’t have karaoke, just good old-fashioned voice. And I’ll tell you some of them were damn good singers. One or two of the songs were a bit rugby like but you could rely on audience participation to old favourites like Roll Out the Barrel and Daisy and the good old wartime songs.”